Problems with Google, Facebook and Ceneo feeds after release

After yesterday’s release we are experiencing problems with uploading feeds from Mergado to the comparison shopping engines. This mainly affects Google, Facebook, Shopping and Ceneo formats. This is manifested by an error message in the comparison engine administration and rejection of products.
We have identified the problem and are working hard to fix it. We apologize for the problems caused.

UPDATE
The bug causing the problem with uploading Google, Facebook and Ceneo feeds has been fixed. If you don’t want to wait for Mergado to automatically re-generate the feeds and fix them in the next few hours, you can speed things up this way:

If there is any other problem, please get in touch.
Once again, we apologize for any complications caused.

UPDATE
We are still experiencing problems with exports to Google. They may be rejected in Merchant Center, we are addressing the situation and working on a fix.

I think You have a problem with incorrect element, VERSION isn’t a vaiid element in xml headers, it shuld be an attribute of rss element.

Thank you for your feedback @martes .
Yes, this was an error and was fixed and released around 1 pm today.
You need to regenerate your export and also reload the feed in GMC. However, we found that some clients managed to reload their feeds in GMC without issues, some managed only after several repeated reloads in GMC and some still have the same issue with rejected products, even though the errors were fixed. The cause seems to be a cache in GMC.
The recommendation now is to keep trying to reload your feed in GMC. We are monitoring the situation. Please write any update from your side, your feedback is very helpful.
We apologize for the complications.

We are experiencing the same difficulties, and found that a temporary fix is to upload the xml file by hand as a separate feed, not by forcing update. Don not rely on GMC downloading the file from an url yet.

I double checked my ‘curl’ history to be sure, and I can confirm, that the same error was still present in at least one of our feeds downloaded for verification from mergado at 16:41.

EDIT: feed was pobably not re-generated. 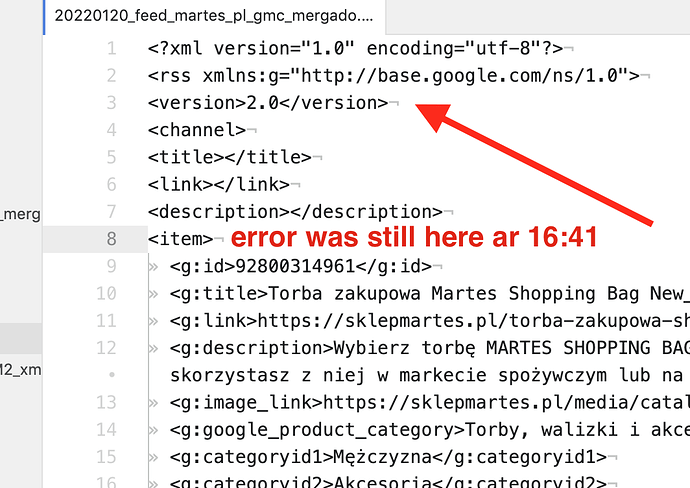 Udpate: error is still present in one of our feeds, even after re-generating it.

I see. Most clients reported that the feeds were finally accepted. One client noted another solution that worked for him:
hiding products from output feed to below 10.000 items,
regenerating all in Mergado,
reloading in GMC - feed was accepted,
than unhiding products in Mergado and regenerating/reloading in GMC finally went through.
Maybe you can try this approach @martes ?

Once we had a correct fee we were fine with uploading it to gmc by hand, but even after regenerating feed in Mergado, the error with “VERSION” was still present on Your server for quite some time, like if the old version was chached.

I was thinking about this and there is a possibility, that even after a fix on our side the feed might have still contained the error. It could happen in this scenario:

In case you did manually fully regenerated your export, your output feed WAS updated, and then only cache could be the issue, as we discussed.

We are sending information on last week’s Google bug.

Release from 19.1.2022 contained changes needed to get new information about the format specification. The reason for the change was a new Mergado version that we are preparing and will post in the coming months.

An inadvertent change to the xmlns attribute of the specification files put the https address instead of http. This information was then transferred to the output feed. The situation has manifested itself in the formats: goods, Google, Ceneo, Rss and Amazon. This change was not detected even by user testing, which we perform before each release.

The mentioned formats were then considered incorrect in the large feeds. After the glitch was discovered and quickly fixed by our developers, all format recipients started processing our feeds again after the release. The exception was Google. Even after a few hours, it was unable to reload the products.

Only some feeds and some clients were rejected. This fact made it very difficult for us to determine the exact cause. We involved other companies from our group in the solution. Despite intensive communication with Google support, we did not reach a final solution until the following day.

Measures to prevent similar situations are currently in the pipeline. These include, for example, a special form of tests for selected formats that will cover the entire functionality of the formats. Combined with the testing of direct connection for selected recipients, a similar situation should not happen again.